So I was reading through various web pages today and found a really cool card game that would be really easy for small children. It may take a few times to get the hang of it but you can use different kinds of cards to play this games based on your child's skill level. 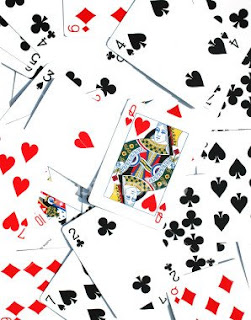 3-13 players
Object: Get four cards of the same suit in your hand


Make a special deck of cards with four cards of the same suit for each player. (Example: If there are three players, make a deck with four hearts, four diamonds, and four spades.)
Shuffle and deal out all the cards.
Players look at their cards. If a player had four of the same suit dealt to him, he automatically wins.
If no one has four of the same suit, everyone discards one card face down to the person on their left.
Each player picks up their new card and adds it to their hand.

Repeat steps four and five until someone gets four of the same suit. This person is the winner.


For more options, play with UNO cards as they have different colors. You can use the colors instead of suits for younger children. Or make your own cards. You just need some sturdy paper (cardboard or card stock work well) and create some cards with shapes or colors. You could also use flash cards, you know, the ones that you use to teach your kids colors and shapes and such. Use the game cards from Candy Land as your cards. Use your computer to create personalized cards by placing your family members pictures on the card and the children have to get 4 cards with daddy on them to win. The possibilities are endless!!

Posted by Sheril Brasher at 7:40 PM

Labels: all ages, games, inside, preschool